The most significant denial I have ever experienced was denial that I had a diagnosable mental illness. It didn’t help when I was younger that people around me didn’t recognize I needed a thorough psychiatric evaluation. I lacked insight into what was really happening, and so did people around me. It is common that people with bipolar disorder are not diagnosed for between 10 and 15 years after the illness begins.

I believe my bipolar disorder started at about 15 years old. It started with anxiety, and then it turned into my first major depressive period, then a hypomania. I also wonder if a full manic episode with mixed features (a combination of manic symptoms and depressive symptoms) followed, too. I remember going to the library, feeling tormented, and trying to find some explanation. I didn’t find the right one at that time. I rather thought I had schizophrenia because racing thoughts confused me. I misinterpreted them as voices. I wasn’t a doctor, so obviously I was not qualified to diagnose myself.

My mental health situation caused me to have a very painful (almost traumatic) and embarrassing experience at school that led the guidance counselor to recommend I go to a private school. After the switch in schools, my mood symptoms eased. I figured it was over, and assumed it would never return. Or if it did, it would just be like the flu. Something you catch occasionally, but with time it goes away. Maybe I didn’t have a mental illness after all.

After describing my late teens and 20s to my current psychiatrist, it was his opinion that my baseline mood was actually mild hypomanic (a mild version of mania) through much of my life. It is likely that I spent months of several years in that state. People always regarded me as being highly energetic and upbeat, or sometimes prone to tirades or outbursts (another manic symptom). Occasional depressions and periods of anxiety did come back, too, but they were short-term, and I figured they had some situational cause.

When depressed or anxious, I did go to general practitioners on occasion throughout the years. At college, the health center referred me to my first psychiatrist, whom I saw once. Later at about 31/32 years old, a general practitioner referred me to my second psychiatrist. All just gave me an antidepressant, which I took for maybe one or two weeks max before stabilizing or switching back to mild hypomania, which I thought WAS stable.

I had been going to the second psychiatrist and his group therapy for a couple of months. When I felt well again I figured I would soon quit. It was then that he tapped me on the shoulder and told me to stay after. He clearly recognized moderate level hypomania.  He said, “Updownflight, you have bipolar disorder. I want to put you on a mood stabilizer.” To that, I told him I was not interested, in no uncertain terms. He gave me a pamphlet and I did not go back. Funny, that was actually the very first time I even had an official diagnosis (or at least one that I knew of), despite all of the antidepressants given to me in the past. Believe it or not, I had never heard of bipolar disorder (or manic depression as he called it) before he diagnosed me with it. I recall skimming through the pamphlet and not identifying with much beyond depression. I just didn’t “see” the manic symptoms. 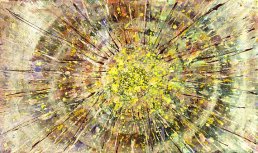 At 34 years old, I started to experience the worst bipolar episodes of my entire life. It is common knowledge that untreated bipolar disorder can worsen the course of the illness over time in various ways. Well, it got BAD! Between stress at work, and the death of my mother, I was triggered into having full blown manias, often with the mixed features. I became a danger to myself and was verbally abusive to others, acting recklessly and violent with things.  My employer threatened to fire me, after a group of six people complained to Human Resources. I was self-medicating heavily with alcohol. All of this made my husband force me back to the psychiatrist. I was in such a state (even suicidal) that the psychiatrist put me in a psychiatric hospital for the first time. There I was put on both a moodstabilizer and an antipsychotic medication, and diagnosed with bipolar type 1, an acknowledgement of my full blown (severe) mania.

So you’d think I would accept my mental illness at the hospital? Well, I guess temporarily. But maybe I could still stop the medications and “handle it” on my own. Hmm? Well, such thinking didn’t work well for me. In a four year period, I was hospitalized nine more times, mostly with full blown mania (often with mixed features and psychosis) and then the longest depression I had ever experienced in my life. The whole four year period was traumatic. I was receiving intensive therapy and frequent psychiatrist appointments. [Still am.] I could not deny my illness anymore. I know my bipolar disorder should not be treated like a prolonged flu. It is here to stay, even despite reprieves.

Since the end of the four years I mention, I have had my fair share of mood lability, despite medications. It’s a frequent reminder that my mental illness is a permanent issue that needs permanent treatment. I take my medications every day and continue with therapy. I will not stop these things. I DO have a mental illness.

If you are interested in bipolar disorder, and wish to read about my other experiences with this illness, you can find more posts under “Mental Health” (a category in the category pull-down on the right side-bar).

8 thoughts on “I’m not mentally ill. This will go away like the flu.”