One day in the summer of 1992, I was hanging out at my university campus bus stop near the student center. The bus stop had numerous flyers advertising various activities. One read “Teach English in Poland through the Local Democracy and the Citizen’s Foundation in Poland.” It said it was a university sponsored trip, and that no experience teaching English as a Second Language was necessary. Hmm? I had never been to Europe at that point. I hadn’t thought about going to Poland before, but it interested me since it was a former communist country. I had studied about communism in high school and university. My studies also focused on China, a country that was still communist. I took the flyer with me and contemplated it.

On a rare visit home to see my parents, I mentioned the flyer to my mom. To my surprise, she was extremely enthusiastic about the idea. Before I knew it, I found myself signing up and with a ticket to Europe paid for by my parents. We flew to Prague, Czech Republic, as a student group, and there I found friends immediately. Our stay in Prague was only two days, but we did a whirlwind tour of the most popular tourist sites, like Wenceslas Square (Václavské náměstí), the Old Town Square, Charles Bridge (Karlův Most), and other sites. I had never seen such a city before. It was beautiful! Little did I know at that time that I would eventually meet and marry a Praguer, so I would visit Czech Republic several times in the future. 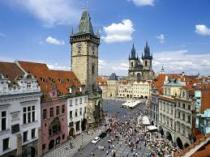 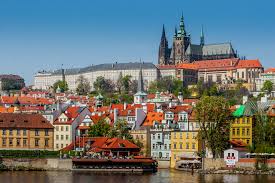 In Prague, we boarded a train at Wilson train station (Wilsonovo nádraží) for the slow trip to our Polish destination of Poznań. The trip was an over nighter and we had to sit the whole time. Our group had a fun time playing games and getting to know each other better, but most eventually caught some shut eye toward the end. The next morning we arrived in Poznań, and were driven to the student hostel you see in the photo below, topped with the sign “Centra Akumulator Batterie”. Funny story – I thought that was the name of the hostel, and when I told a Polish friend that I lived there, they were quite perplexed. Little did I know it was an advertisement for a car battery. She eventually figured out my confusion with a laugh. 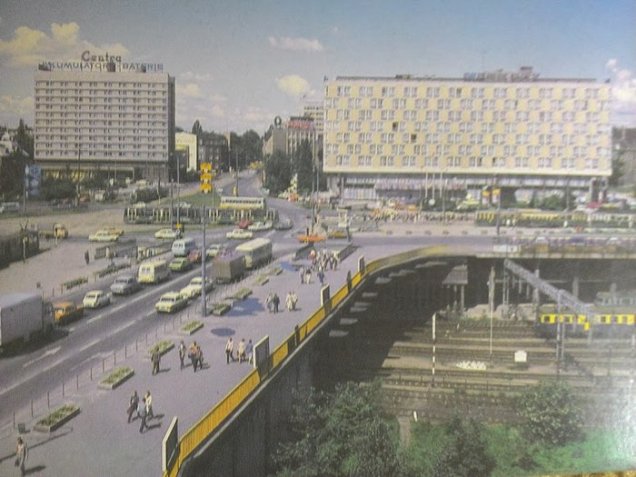 When I checked in at the hostel, the front desk clerk gave me my key for room 11. I was to drop it off there each time I left the building. When I’d pick it up, she told me to ask for “dziesięć jeden” (a real challenge to say), and that she wouldn’t give me the key if I said it in English. So I learned it well. She was a friendly older lady. She always smiled each time I saw her.

On the first day, we also went to a beautiful old government building in Poznań where the program heads were located. They gave us instructions on how to teach the classes and what types of materials we could use. The materials would be there to copy whenever we needed them. We even did some practice teaching.

The English instruction I provided was conversational English. Most students could already understand a lot. My six students were mostly young women my age. They turned out to be a fun lot, and I made special friends with two of them. In the beginning, the program was disorganized and had no room for us. You’d find us sitting in a park having our classes. Finally when we got  a room, the instruction became a little more formal, but we still had fun acting out plays and learning about each others’ cultures. From my Polish students, I got the clear impression that there was an optimism in their country at that time. They were very interested in western culture, and were excited about their prospects. These students seemed to have high aspirations for themselves. I was impressed how independent spirited they were, and what a great sense of humor and openness they all seemed to have.

My two Polish friends, Beata and Maria, invited me to places around the city and even to their houses for dinners. [Oh my, the food was delicious!] It was a wonderful way to get to know the Polish people and their culture, and to see how they lived. They would even meet me at my hostel, and join me and my other friends at the local disco where we’d dance up a storm, often with partners we couldn’t even converse with. When you dance, it doesn’t matter. Partying has it’s own international common language.

The classes were scheduled such that I sometimes found it difficult to find places to eat. The hostel had a cafeteria, but it was mostly closed when I was available to eat. I ate soy burgers from a local food truck, and made a long walk to a “Milk Bar” near the old town square. I liked the Milk Bar the best because the food was simple, cheap, yummy, and homemade. I’d eat things like stuffed cabbage for dinners and crepes with sugar and lemon juice (naleśniki z cukrem i sokiem cytrynowym) along with hot tea for breakfast. When I couldn’t get anywhere on time for meals, I just didn’t eat. Sometimes a little food store was open, but the most they had were rolls and pickled herring, and such. Occasionally the group would buy kielbasa and cabbage and make it in the hostel. I never went to nice restaurants. I didn’t have the money for it. I did often treat myself to ice cream (lody) at ice cream shops or stands, because unlike restaurants and cafeterias, they seemed to be open and everywhere at all times. It was clear to me that Polish people really love ice cream. They created the most beautiful sundaes I had ever seen with wonderful edible decorations, and even sparklers, on them. It reminded me of the wonderful food I had at both Maria and Beata’s homes, in terms of loving preparation.

Speaking of money, I received a monthly stipend. I was paid in Polish Zloty. I was shocked to see that they paid me what seemed like an exorbitant amount. I forget, but something like one million Zloty or so. It wasn’t as much as it sounds, believe me, but the pile of money was huge! I found that more than enough to make ends meet and afford weekend trips with my American and Polish friends.

One weekend, some Polish and American friends and I took a train to the beautiful city of Gdańsk. Another, we went to Kraków and visited the Auschwitz Memorial and Museum by bus. The last weekend we took a quick train ride to Germany, which was nearby to Poznań. The cities were all beautiful, and had great and popular nightlife. Though the tour through Auschwitz was disturbing and sad, the countryside around it was spectacular. I think on the way there, I saw the most beautiful sunrise ever. It was an overnight trip.

Other cities in Poland (left to right): Gdansk and Krakow 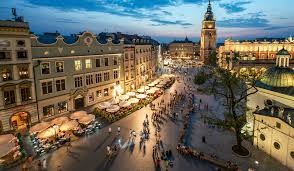 I was sad to leave my Polish friends at the end of the summer, but excited to get back to college. I kept in touch with Beata and Maria for years afterward and even met up with Beata in New York City at one point. Beata became a career woman in Warsaw, while Maria married and had children fairly young. Both seemed to be very happy with their lives.

One accomplishment during the trip that really made me feel good was that I noticed a real improvement in all of my students’ English. They seemed to speak it more confidently and fluently when I left. When I returned to college I changed my study focus. I abandoned the idea to study Business, and declared East Asian Languages and Area Studies as my major, with English as my minor.

Later in my life on the way to visiting my husband’s family in Czech Republic and Germany, we passed through Poland. We visited Poznań briefly (and went to the Milk Bar) and enjoyed the countryside. I’m afraid to say that I was unable to connect with Maria. In Poland, we also stumbled upon a charming city called Wrocław. I hope to someday go back again and explore other cities.

Poland is a lovely tourist destination and has wonderfully welcoming citizens. If you can find a chance to study, work, or just travel there, I highly recommend it. My experience teaching for the Local Democracy and the Citizen’s Foundation in Poland is one I’ll never forget. 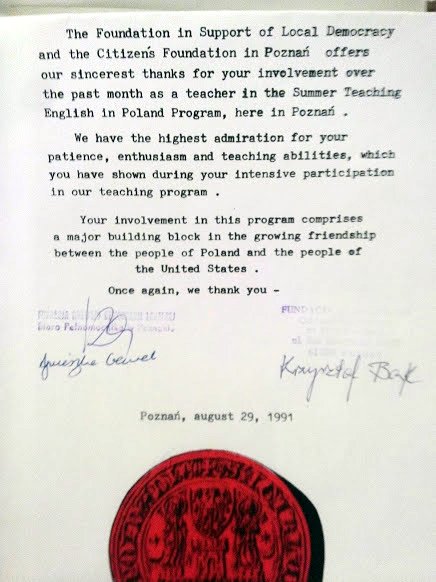