I’m pretty sure most people reading this post have felt under-praised in life more than overpraised, at least at some points in life. It’s common to yearn for recognition and positive reinforcement when we do well, or even because we don’t do bad things or underachieve on a regular basis. Such praise helps motivate us to continue achievement. It can boost our self-esteem and therefore keep us psychologically well-adjusted. Obviously excessive criticism does us harm, but what about adulation?

Please note when reading this post that I consider myself to be a normal person. I do think I have some talents and positive attributes, but I don’t think I’m very exceptional in any way. I have mostly had a good self-esteem, but unless I’m manic (I have bipolar disorder), I don’t feel grandiose. My parents were neither particularly critical, nor did they praise me without good reason, but there have been some people in my life that did so, for various reasons. I, too, had my fair share of criticism, but I’ll leave that topic for a possible future post.

In my view, adulating a person can ultimately backfire, in various ways. It can hurt the person receiving and/or giving the compliments. It can also be perceived by the receiving person as a means of manipulation. For example, I recall dating a couple of men in my youth who lavished me with praise, but whose main intent was to get me in bed. I’ve also experienced adulation from people wishing to become my friend or to sell me a product. The praise was almost like currency trying to buy favors or patronage. Looking back, some of these attempts seemed almost sleazy, superficial, or even overzealous in nature. Somehow I’ve been lucky not to have often bought in to such attempts, but some people do. Ultimately, such people can sometimes be hurt by them.

The most extreme case I ever experienced was from a psychologist I went to. I remember being shocked at the sheer number of compliments he gave me, for even the most mundane things and normal achievements. In the very beginning, I wondered if he thought I needed a self-esteem boost, but at the time I felt reasonably comfortable in my skin. Then it almost became laughable. Later I even suspected he had developed a lust for me. It all then became confusing and uncomfortable. When I’d get home after each session I’d jot down all of the compliments he gave me. The count became staggeringly large. Erotic countertransference is not that uncommon between a therapist and a client, but ultimately it is harmful when left unchecked. I eventually became scared of this psychologist and discussed the issue with my psychiatrist and husband. They advised me to discuss the issue with the psychologist. I did, but despite my efforts he persisted. I had to quit him and find another therapist.

Too much praise can prevent a person from trying harder at things. For example, if you’re told you’re very smart too often, you may be prone to avoiding challenges, either because you don’t wish to fail (and then be perceived as less smart than originally thought), or you develop an overblown sense of superiority and feel like you’ve already proved yourself.

Sometimes being praised for not doing something that is either bad or harmful can almost make doing the harmful thing more normal than exceptional. Take smoking, overeating, or even keeping a messy house. People often fall back to more negative behaviors because they find they don’t always need or care about the praise, especially if they don’t receive criticism when engaging in the negative behaviors. 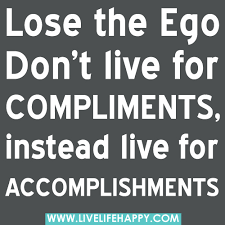 I can’t end this post without mentioning that some people do develop overblown self-esteems. I think it’s most often the case when adulation begins early in life, such as from parents. If you are conditioned to believe you are well beyond the norm in many ways, it may breed narcissism or grandiosity. Such traits can create negative behavioral issues in life. Either the adulated person will expect constant recognition to maintain their self-esteem, or act overly superior, which often causes negative reactions from others.

I hope that people will give compliments when compliments are due, but do so when well-earned. A little sugar is nice, but too much can cause sickness.