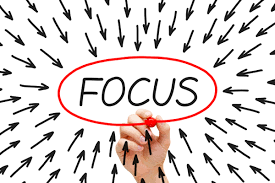 I have read that some people with ADHD/ADD (Attention Deficit Hyperactivity Disorder) have a tendency to hyperfocus on one task, subject, or topic, while others have difficulty focusing on any one thing at all. I don’t have ADHD or ADD, but people close to me have drawn attention to my trait of hyperfocusing since I was a little child. I could daydream about the same thing for hours on end. During work, I would focus solely on one project the whole day, by choice. Though I would do other work, I’d squeeze it in as quickly as possible during the last hour or so. I sort of do the same thing at home, and cut corners. At both places there are also tasks that sit on the back burner long-term, or forever.

When one interviews for a job, saying that you are a good “multitasker” is considered a strength. I can see this, especially if you are able to complete multiple tasks in a timely fashion, and do so well. I admire such people, but believe most do perhaps a “good” job at most, but maybe not an exemplary job at any given one. I suppose it depends on one’s boss’ preferences which scenario is preferred, and yours. Certainly some hyperfocused employees are pigeonholed at times. I know I was. That can work out well, or hold you back.

Sometimes I can grow almost obsessive about completing a project, even to a point of sickness. Sometimes at work, I would forget to eat lunch. At home, all I’d think or talk about would be my projects. It annoyed my husband, and he realized it was bad for me. It added a great deal of stress. Not that multitasking is a walk in the park.

I have bipolar disorder, but am not so sure that the type of obsessive focus or thinking is commonplace in my illness. Actually, when people are manic, they often have difficulty focusing long on any particular thing, while thoughts race rapidly. I guess looking back, I did have difficulties at those times, but at the same time, some level of obsession remained. Imagine being manic and have this run through your mind at 100 mph: “Sum formula in A8. Don’t forget to upload brochure. Write the ad for the magazine. Discount for three month programs. Get going! Get going! Now! I want spaghetti for dinner. Row row row the boat. Why is she such a hassle? Concentrate, Updownflight. Get going! Division formula in D8. Is hubby coming home tonight for dinner?”

Many people in history with the hyperfocusing trait have achieved great things. Composers, like Mozart, have written symphonies in record time. Writers have cranked out books one after another. Even seemingly more normal people have achieved huge goals in weeks that others may have required years to complete. However, something usually gives. Think of Einstein. His life revolved around his science, but things like self-care and other responsibilities suffered. This trait definitely has its negative aspects.

I admire the “super moms” and “super dads” out there that have great careers, exercise most days, cook great meals, clean their own houses, have hobbies, shop regularly, take kids to karate, etc., etc. OMG! That’s stressing me out just writing about it! Perhaps this category of achiever doesn’t always skyrocket to the top in any given way, but I think many do find a success in life that can be equally admirable to a hyperfocusing achiever.

I’m never going to be a Mozart, Hemmingway, Einstein, or the like. I’m also never going to be a “super mom”. My illness exacerbates my efforts. Of course, I think very few people (even without an illness) fit these categories. But how do they manage to find success without the stress?

Being able to just “let go” or “trim down” certain tasks is a skill that many people need to learn. I wrote about this a bit in my post It’s OK to minimize your work or other responsibility load. It includes an exercise on prioritizing, scheduling, and eliminating tasks.

What about curbing hyperfocusing? Well, that can be tough for me. My therapist again recommends scheduling time(s) to step away from certain work. Set alarms to do tasks on a list, or even to walk. If intrusive thoughts creep in, practice mindfulness and meditation. Play music for distraction. Set up rewards for doing other things.

I know it’s not easy to find the right balance in work and thought focus. It takes planning and practice. I’m also not saying you can’t or shouldn’t strive to be “super woman” or “super man”, but only as long as it doesn’t hurt you in any way in the end.

Do you tend to be a hyperfocuser, a multitasker, or neither? If you’ve found some other ways to get things done without much stress, please share how you do it.

20 thoughts on “Hyperfocusing vs. multitasking”