My husband and I have a GPS navigation system in our car for long trips. Hubby is almost always the driver. Despite our Tom Tom’s verbal instructions, my hubby still likes me to be the Tom Tom lady’s “second voice”. That certainly ensures getting to our destinations without problems, and yet it takes away some of my freedom to just be a passenger, who can stare out the window and daydream.

I remember when I was a child, I was a daydreaming passenger. I’d be in the backseat with my older siblings (when I was very young), or had the whole backseat to myself, after they left home. I’d just stare at all of the interesting things that passed by on the road. Even little things would spark my fancy. Other times, the movement I felt sent me into a blissful sleep. No, I never got car sick. 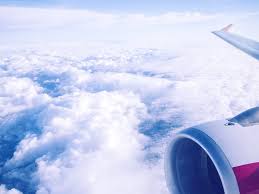 Even more than cars, I love to take trains when I can. Yes, I know that flying to far away destinations is definitely faster and often cheaper, but all I see in planes are usually clouds below. It’s only when the sky is crystal clear or the plane’s altitude is low that the earth below appears in some interesting way. On trains, you see the varied landscape pass by, goings on in towns, or a part of the area that is only ever seen from the train’s tracks. I also love the sound and the feel of the train; its meditation inspiring repetition, soothing vibrations, occasional bump, and the thrilling/shocking experience of two trains passing by at great speeds in opposite directions.

The train I take most is just a commuter train to New York City. Believe it or not, the ride through New Jersey’s landscape is quite varied, with rural land, small towns, a huge airport, and then the heart of two major metropolises. The train is a good place for people watching. Each stop brings a different group of characters.  Some are just headed to the next town, a number have their luggage ready for a long flight, and the majority is looking forward to a day in the city that never sleeps.  The primary destination can’t be seen in the final minutes of the ride. You pass through the tunnel under the Hudson River, and finally arrive in the guts of an underground world hardly renovated for decades. And then once you reach there, you may not even see the light quite yet. A transfer to a subway, yet another experience of a kind, may also be necessary. And when you return home? I can’t forget to describe that. Hordes of people stare quietly at the train bill board that announces the train track number. Once the track number is up, there is a mad dash (literal running) to ensure a desirable seat for the way home.

Sleeper trains are among the most romantic. Have you ever slept overnight on a train? I’ve never had a better night’s sleep! I paid about $100 for a sound machine, for near my bed, that plays “rainfall”, “ocean”, “meadow”, and “train”. Believe me when I say it’s as powerful as a sleeping pill. And when I’m not sleeping, it’s nice to walk down the train aisle, without fear of losing your seat. And where else can a regular passenger sit in a dining car for a relaxing meal? Not that many planes offer such comforts, especially if you’re not spending several thousands of dollars for first class on the journey.

It’s true that taking a non-stop flight is usually much faster than a train, but nowadays the express trains make the extra time almost worth it. The TGV from Paris to Geneva takes about 3 hours and 5 mins, while the non-stop flight takes only 1 hour and 10 mins, but let me tell you that the views on that train ride are well worth the difference. Trains around the world are getting faster, and usually the hassles before and after boarding are far more bearable.

What is your favorite passenger ride? What was your longest journey in a car, train, or plane?

11 thoughts on “A passenger with no need to navigate”