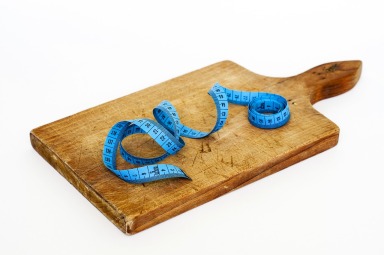 About two and a half years ago, I started a once per week post series called “Friday Fitness and Weight Loss Updates”. Each Friday, I posted my weight loss for the week, as well as my challenges, discoveries, tips, and occasional healthful recipes. That lasted a total of 30 weeks, a few which were spent on vacation in Portugal. I shed over 10 pounds (4.5 kg) during that effort, though by week 30 I found myself down only about 5 pounds (2.25 kg) from my starting weight, because of subsequent regaining. That effort was then abandoned. But, after a long hiatus, I’ve dusted off my sneakers, and tracked my first day’s meals. Below I describe my inspirations to restart the journey, as well as a tip you might find humorous.

A couple weeks ago, my husband looked me square in the eyes and declared “I am starting a serious diet!” That was the first time I’d heard such a thing from him. Of course I am also in dire need of upping my exercise and shedding well more than a few pounds. Coincidentally, right now I am exactly the same weight that I was at the very beginning of the effort I referenced above. I guess it could be worse. I could be even heavier, but my blood work results are all bad, and even my blood pressure has markedly increased. My husband has the same issues.

There is a strong chance that we may be moving abroad in the not so distant future, so we decided not to be “chunky Americans”.  I know that I can reach a normal BMI. I’ve done it a few times before, in my life. In fact, I have lost more weight during one past effort than I really need to lose during this one. It’s doable! I can do it!

In addition to the clean sneakers and planned meals for today, I took another symbolic and helpful step. I identified the high fat/calorie food that I binged on most this past week. Reduced fat peanut butter. Below I briefly describe and picture what I did with it.

I will be basing my starting weight on the weight I saw two days ago. This Friday, I will post my weight loss since that day, and recommence my journey. My eating plan will be based on an old Weight Watchers diet, called the “Core Plan”, which both my husband and I liked, and both had weight loss success following. That plan emphasizes eating lots of fruit and vegetables, lean meats/proteins, fat free (or low fat) dairy, whole grains, pulses, and only small amounts of healthy oils (i.e. olive or canola). I will be aiming to stay below a set daily calorie allowance, rather than any points system. Any non “Core” foods consumed, must not push me over my calorie allowance.

Please wish me luck and support!