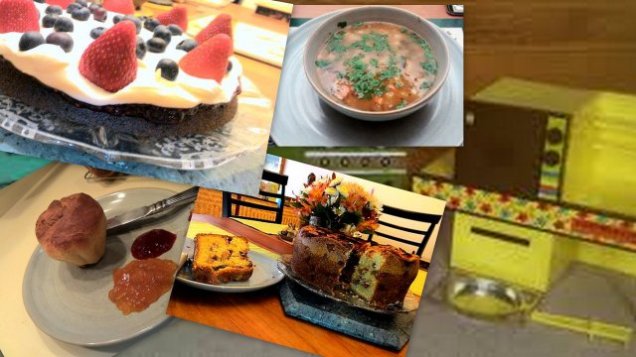 Julia Child sums up what I’ve learned over the years about cooking, that “The only real stumbling block is fear of failure. In cooking you’ve got to have a what-the-hell attitude.”  I can relate to that, especially now.

Where did I originally learn the basics of cooking? Perhaps in home economics class to a degree, and certainly from my mother. My ancient Fanny Farmer cookbook certainly also helped. I remember always being interested in cooking, so I was an enthusiastic student. I was also willing to experiment. Like Julia Child said, it is necessary to just try it and not be intimidated.

When I was only about 6 years old my grandmother asked me what I wanted from the Montgomery Ward catalog. I picked the Easy Bake Oven, one of the more expensive “toys” in the catalog. I could tell she noticed that, but she bought it for me anyway, probably thinking it was educational.  At that time, I already cooked my own scrambled eggs and made toast (thanks to mom), and felt pretty good about it. In the Easy Bake Oven you mix a batter (or cookie dough) and put it inside the oven on a miniature cookie sheet or cake pan. I did this by myself, just randomly concocting a batter that seemed the same as what I saw my mother concoct.  At the other end of the oven was my older brother John. I might have been a “Sinister sister Cindy”, but I was good enough to make him cakes and cookies.  Honestly, it tasted so-so sometimes, but he and I ate it anyway. I didn’t worry so much about the taste at that time. I only wanted to have fun. I also felt quite proud that I created something that was edible.

One year at college I lived in an apartment with my friends. We decided to chip in on all of the food and eat family style. The problem with that idea is that you come up with a list deleting this food and that food that one roommate won’t eat. In the end, it seemed like we were eating tacos and Hamburger Helper every night. I had never eaten Hamburger Helper before, and I found out why. So, that didn’t last that long and we went on our own. One roommate, Liz, ordered delivery most days. Susan seemed to eat boiled cauliflower every single night. She was the slimmist of the crew. Sonya made El Salvadorian food, and I ate things like baked salmon with potato and veggies, pot roast, and pork chops with apple sauce. In the end, I feel I ended up with the most nutritious foods. I started to really like my food. Old fashioned, like my mom’s, but good.

After I got married in my late 20s, and throughout my 30s, I found myself cooking fancier dishes for my husband, occasional guests, and the holiday dinners for my larger family. I wanted to impress. But unlike cooking just for my husband, cooking for the large groups somehow made me seriously anxious. I loved cooking so much, and developed a bit of perfectionism about it. There would be so much to do to prepare. Not only properly timing the completion of gourmet dishes so all dishes were hot, but making the house nice (hubby did help), setting the table, attending to the entertainment, and not sweating or yelling or drinking too much during the course of the activities. I always succeeded in the end with a momentary sigh of relief, but that fear and the mid-cooking tirades continued for years. Luckily for me, my sweet husband usually did the dishes in the end.

In my late 30s, a serious illness placed everything on the back burner, including cooking. Suddenly, I could care less what I was eating and how much of it. I’m not sure, but I think I even ate a Hamburger Helper once. Honestly! But I got better little by little, and I again began to cook. Not just cook, but cook because I liked to cook again and because it even became somewhat therapeutic for me. During this time you might have even found me baking muffins (see my Radiant Banana Nut Muffins from My Utility Baking Research Kitchen post) or cakes at 3 am. My dishes got more adventurous, and I became an expert at diet and other healthy cuisine. Some of my favorite Weight Watcher’s Core Plan cuisine focused on low fat proteins, whole grains, fruits and veggies. A favorite quick meal included my Lentils, Herbs & Ham with an Egg “Hat”. When I went low carbohydrate, I made recipes like Asparagus Wrapped with Ham with Horseradish Cream as an hors d’oevre.   It all tasted great!

I’m quicker at cooking nowadays, and am again having fun cooking gourmet meals. I’ve discovered ingredients that I never cooked with when I was younger, like celery root, kohlrabi, and fresh figs. Oh my, Pan Roasted Lamb Chops with Honey Balsamic Goat Cheese and Figs is my husband’s and my favorite entrée of all time! Not a diet dish, but one to savor on a special occasion. It’s easy and quick to make, too.

My anxiety when entertaining has seemed to fade a bit. I suppose part of the reason is because of experience over the years. I’m also mastering dishes that were previously difficult for me to make. When I was younger I had a hell of a time making anything that called for yeast. I’m just not good at kneading dough. But alas, that problem was solved. Hubby gave me my favorite kitchen toy of all time, a Kitchen Aid mixer with numerous attachments. I didn’t give up! Now I kick butt making brioche, cinnamon buns, and a Czech Easter bread you might want to try next month called Mazanec. It’s a large round loaf bread with rum soaked raisins, lemon zest, and slivered almonds baked covered with blanched whole almonds. It tastes great with butter and/or your jam of choice.

It’s amazing how far I’ve come with my cooking over the years, and how much enjoyment it gives me. If you want to go that one step further in your cooking, just have that what-the-hell attitude Julia talks about, and have fun. Make a deal with your family, you surprise them with something new, and they clean up afterwards.

If you like this post, please consider following my blog to see my future posts. Thanks for visiting!

2 thoughts on “From Easy Bake Oven to eternity”