My Czech mother-in-law frequently made this trifle version of a Malakov (sometimes spelled “Malakoff”). Treasures of yumminess, like slivered almonds, banana slices, orange segments, and raspberry preserves filled vanilla wafer cookie sandwiches, reside in an intensely delicious thick chocolate mousse, which she called “Paris Cream”. It is best left to chill for at least 24 hours before final decorating and serving. Everyone I know that has tasted this has been overwhelmed with pleasure. For that reason, I sometimes call it “Chocolate Paris Cream Delight”.

Note: There are raw egg yolks in this recipe. For extra safety, consider using pasteurized eggs that are available at some grocery stores, or can be pasteurized at home. Google to learn how. My mother-in-law never used pasteurized eggs.

Spread raspberry preserves in between 2 regular-sized vanilla wafer cookies so that rounded sides of wafers face out. Repeat with all vanilla wafers making 10-12 “sandwiches”. Set aside. I also recommend preparing the orange segments/chunks ahead of time, to set aside. Do use fresh oranges, not canned. I think regular oranges taste much better in this dessert than Mandarins. I use navel oranges to avoid having to remove seeds. Drain excess juice from segments when adding to Malakov, later below.

In a large bowl, whisk together egg yolks with confectioner’s sugar until well mixed and smooth.

In a small bowl or double boiler, melt the chocolate according to baking chocolate instructions. As soon as it’s completely melted, mix in the small amount of boiling water. While the chocolate is still liquidy, but not extremely hot, slowly whisk into the egg yolk mixture, until smooth.

In a separate medium-sized bowl, whip the heavy whipping cream and then gently fold it into the chocolate mixture to form the Paris Cream.

Prepare a medium-sized glass bowl (or trifle bowl) that will contain the finished Malakov. 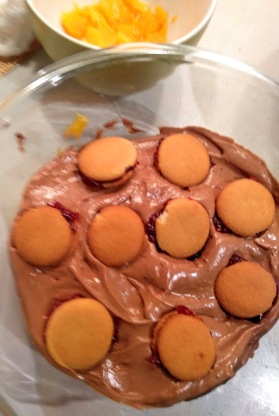 Let the bowl of Malakov trifle chill in refrigerator for at least 24 hours. This allows the flavors to mingle and for the vanilla wafer sandwiches to soften up a bit.

Right before serving, decorate the top of the Malakov with freshly made sweetened whipped cream and optional fresh berries (and/or chocolate shavings).

Serve a scoop in individual bowls, making sure each bowl has some of each Malakov ingredient. Serves approximately 10 people.

For a short history of the dessert Malakov, and some torte-style Malakov recipes see THE MALAKOFF, A COURTLY RUSSIAN DESSERT, IS A SPECTACULAR on the Chicago Tribune website. 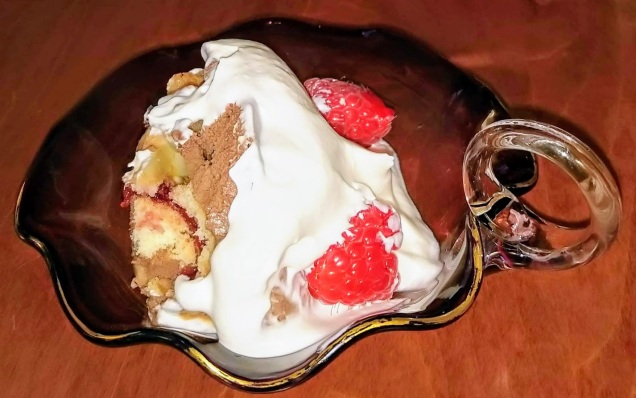 This is one of the dishes my mother-in-law used for serving the Malakov trifle.